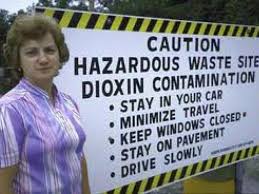 Times Beach, Missouri, contains both the biggest environmental disaster and story that most people are not familiar with along Route 66.  Yet, during the 1980’s the plight of Times Beach reached international attention.

The common practice at the time was to spread recycled machinery oil to suppress the dust along dirt roads.  Unfortunately, the contractor that Times Beach hired to spread recycled oil was also spreading one of the deadliest chemicals known to man, later to be identified as dioxin.

Join Anthony Arno as he talks with the final mayor of Times Beach, Marilyn Leistner.  At the age of 80 years old, Marilyn tells the unbelievable story of what it was like to completely purge an entire comuunity of 2000 residents, 800 homes, every automobile, and even the water tower.  Today, Times Beach no longer exists, as every item that was once part of this community has been buried into a specially created landfill and is now known as Route 66 State Park in Missouri.

Mark Linder is bicycling Route 66 to honor his son, Kevin, who passed away from pediatric cancer at the age of 6.  Please support Mark by donating just $10 to aid two organizations, DC Strong and CureSearch.  Mark joins the show to tell about his first two days on the route, including mechanical issues that were unexpected.