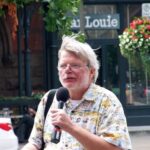 David Clark , operates Windy City Road Warrior and offers walking tours of Chicago along Route 66.  The first in a 3 part series features everything you need to know about starting (or ending) a Route 66 tour in Chicago, IL.

Join host Anthony Arno as he talks with Dave about: 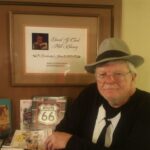 Please consider supporting both The Route 66 Podcast and Scholarship Program.  All supporters will receive an additional 15 minutes of conversation with David, where he talks about:

Congratulations to this months Patreon winner, Charli Beeton,  from the United Kingdom, who has won a copy of The Road Crews Songs from The Mother Road CD.   For next month, one lucky Patreon winner will win a bag of Route 66 Chicago Sweet & Salty flavored snack mix.