The code talkers were pivotal during the Battle of Iwo Jima, a 6week intense battle that resulted in 25,000 casualties on both sides.    From a group of 450 Navajo Native Americans, MacDonald is only one of five surviving Navajo Code Talkers and he shares his life experience with The Route 66 Podcast.  After the war, MacDonald was sworn to a code of secrecy for the next 23 years while working as a Project Engineer for Howard Hughes on The Polaris Missile Project.  MacDonald also served as a Chairman of the Navajo Nation for four terms.

In addition to MacDonald, Route 66 realtor Jacque Kellogg talks about her initial reaction when a local motel owner in Flagstaff reluctantly decides to list the El Reno Motel on the market.  Unknown to her, Kellogg later learns that the motel has a historic place in history regarding the Navajo code talkers and the motel was later taken off the market. 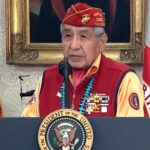 Route 66 Patreon Program
The Route 66 Podcast has launched a Patreon campaign, where you can pledge a monthly donation to help support both the podcast and 2021 Scholarship Program.  The Route 66 Scholarship Program not only includes awards for students in grades K – 12, but will include a 2021 college level award.  More information about the Patreon program, including monthly prizes for supporters can be found here.

Special thanks to the Route 66 Podcast and Scholarship Patreon supporters:

Route 66 Face Mask
I will be giving away a FREE Route 66 washable cloth face mask to a random podcast listener who shares with us their favorite Route 66 guidebook.  Record a short, 60 second message about your favorite Route 66 guidebook, and I will randomly select a winner to receive a Route 66 washable face mask.  Simply visit The Route 66 Podcast webpage and click Send Voicemail on the right side of the page where you see a microphone tab.
Historic Route 66 Motel: The El Pueblo Motel
Website: Navajo Code Talkers Association