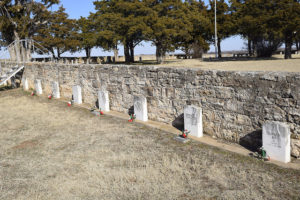 Fort Reno in Oklahoma was once the home to 1300 German Prisoners of War (POW’s) during World War II.  Originally established in 1874 to protect the Darlington Indian Reservation.  Fort Reno was used as a horse training camp for WW I and WW II, and the site was later used to house German soldiers who were captured in Northern Africa during WW II.

Carolyn Barker shares some of the most fascinating (and unknown) stories about the Fort Reno POW camp.  While nothing but a water tower remains from the POW camp, there is a cemetery with 62 soldiers who were laid to rest.  These solndiers died from war injuries, illnesses, accidents, and even a murder where five POW’s were charged and eventually hung.

Carolyn tells a number of very touching stories, including the reaction from German soldiers who honestly believed that New York was entirely leveled during the war and wondered how the city could have been built back so quickly; the loyalty of German soldiers to the local community who assisted local farmers during the war effort, and the repatriation of soldiers who were buried in Oklahoma and later relocated back to their motherland after family members assumed they were lost with no record of death. 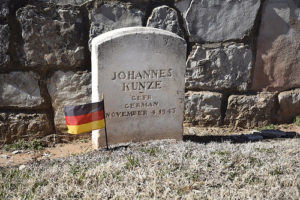 This is the most famous POW buried at Fort Reno. Johannes Kunze. He turned into an informant for the Americans and was found out and brutally murdered by his fellow prisoners.