Just before the birth of Route 66, the single worst incident of racial violence in American history took place in Tulsa, Oklahoma.  Within 24 hours, more than 35 square blocks in the Greenwood section of Tulsa were burned, causing 10,000 residents in one of the wealthiest black communities in America to instantly become homeless.  Join host Anthony Arno as he talks with Dr. Scott Ellsworth, a leading expert on the Tulsa Race Massacre. 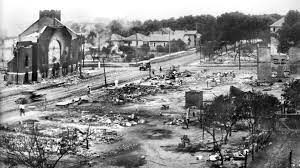 Article: How a Historian Helped Tulsa Confront the Horror of Its Past

Documentary: Blood on Black Wall Street (The Legacy of the Tulsa Race Massacre)