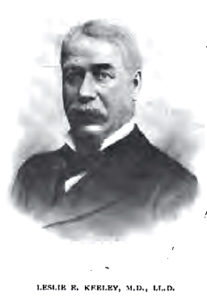 Join Dr. Timothy Hickman, from Lancaster University (United Kingdom) as he talks with Route 66 Podcast host Anthony Arno all about a little known treatment center that continued to exist well into the glory days of Route 66.

By the 1900, Dr. Keeley was perhaps the most famous physician in the world that people loved to hate because of his methodology.  Many thought that he was a real “quack,” but he was certainly a pioneer in treating addictions with over 200 treatment centers around the world by the beginning of the 20th Century.

Don’t miss one of those episodes about Route 66 that truly contains a bizarre but true story about life along The Mother Road. 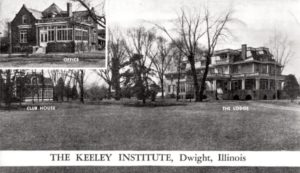 Click HERE to see a list of episodes in chronological order, traveling from Chicago to Santa Monica.

Ramona Lehman is just as iconic as The Munger Moss Motel and recently celebrated 50 years as the owner and operator of a Route 66 must see stopover along The Mother Road.

Just before the birth of Route 66, the single worst incident of racial violence in American history took place in Tulsa, Oklahoma.  Within 24 hours, more than 35 square blocks in the Greenwood section of Tulsa were burned, causing 10,000 residents in one of the wealthiest black communities in America to instantly become homeless.

Popularized by the famous song, Take It Easy, one of the most famous street corners along Route 66 created was written by Jackson Browne.  Today, Winslow, Arizona, contains a small park on a corner of Route 66 featuring both a mural and bronze statue.  Join host Anthony Arno as he talks with both of the artists who have made the Winslow corner one of the most popular stops along Route 66.

Dan Rice operates one of the most famous Route 66 souvenir shops along Route 66, located on The Santa Monica Pier.  Dan is a past president of the California Route 66 Association and was instrumental in placing the famous End of the Trail sign on the Santa Monica Pier.   This is the final episode in a 3 part series featuring The Beginning, The Middle, and The End of Route 66.

Brenda Bradley operates The Midpoint Cafe, a popular stop where travelers stop for a picture in front of the famous sign.  This is the second episode in a 3 part series featuring The Beginning, The Middle, and The End of Route 66.

David Clark , operates Windy City Road Warrior and offers walking tours of Chicago along Route 66.  The first in a 3 part series features everything you need to know about starting (or ending) a Route 66 tour in Chicago, IL.

Roamin’ Rich represents the latest generation of preservationists dedicated to promote and preserve Route 66.  He is the president of the Missouri Route 66 Association, a key member in the Painted Desert Trading Post cooperative, and the person behind most of the shields you see painted on the roadway.

Unknown to many, the Bloomington-Normal (Illinois) area along The Mother Road is the birthplace to aerial circus performance in America.  The circus episode features a talk with three area residents, including the Human Cannonball, Wayne Wright who has been shot out of a cannon over 1100 times.

Episode 32: The Blue Whale of Catoosa

Blaine Davis (78 years old) talks about his fathers life long work as the director of the Tulsa Zoo, growing up with parents who truly appreciated the outdoors, and what prompted Hugh to construct The Blue Whale upon retirement despite not having any welding experience or working with cement.

The Coral Court Motel opened in 1941 and had an unusual art deco design and each room had an adjacent garage for travelers to park their automobile.  Join Shellee Graham, author of Tales from the Coral Court, talk about the fascinating history of The Coral Court and the man behind this fabled hotel, John Carr.

The Route 66 News website at  www.Route66News.com  is a clearinghouse of news and historic events taking place along The Mother Road.  Join The Route 66 Podcast host Anthony Arno as he interviews the curator of Route 66 News, Ron Warnick.

Episode 8: The Tattoo Man of Route 66

Are you a dedicated fan of Route 66?  What makes you think so?  Do you have tons of Route 66 memorobilia in your home?  A wide assortment of Route 66 t-shirts?  Something special that screams out Route 66 on your car?

Join host Anthony Arno on The Route 66 Podcast as he interviews the ultimate Route 66 fan, Ron Jones.  Ron has over 150 tattoos on his body dedicated to Route 66.

Episode 7: The Burma Shave Story with Clinton B. Odell

Administered by the National Park Service, the Route 66 Corridor Preservation Program is the federal governments program to preserve and educate the public all about historic Route 66.

As the founding member of The Fireballs, George Tomsco talks about the bands early history while playing along Route 66, what it means to being credited with the sound of Surf Music,  and what it was like having the biggest hit in America just before the Beatles arrival.

This episode features a talk with the youngest generation of Route 66 historians, Dylan Wallace, a high school senior who painted a Route 66 mural on the side of a Wilmington, IL, antique shop.

He’s the guardian of Route 66: Angel Delgadillo.  At almost 90 years old, he’s been a fixture on Route 66 in Seligman, Arizona since the day he was born.  Angel formed the very first Route 66 Association in the world when he saw that the local economy begin to decline when the Interstate was opened.

He’s written over 30 books on the American west, but one of the earliest ones was simply titled Route 66: The Mother Road.  He’s also one of the biggest Route 66 advocates that you’ll ever meet, and the voice of Sheriff in Pixar’s animated movie, CARS.  Listen to the very first guest on The Route 66 Podcast discuss his earliest memories of Route 66, his role in the creation of CARS, and the not so famous past stories about The Mother Road.

What happens almost 20 years after a New Jersey school teacher attracts national attention by having his students successfully bicycle over 2000 miles in the classroom aboard an exercise bike while learning all about Route66 with the school’s only computer connected to the Internet?  The Route 66 Podcast!

Listen to this very first episode of The Route 66 Podcast to hear all about the program and a little bit about Anthony Arno, a 5th Grade teacher from New Jersey with a passion for The Mother Road.